Both the Boys and Girls Volleyball teams are still in action, extending their season into the Regional tournaments.

The GVB Team defeated Franklin Co. HS to win the Conference 3 Title.  Last night they defeated Riverbend HS last night 3 – 1 after losing the first set and scratching back to win the second – to win the first round of Region play.  The girls will host Ocean Lakes HS on Wednesday at 6:00 PM.  If the girls win Wednesday – they are in STATES!!!!! 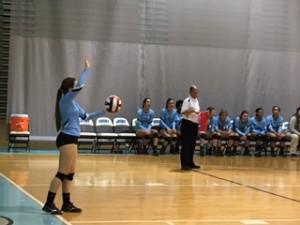 The BVB Team were the Conference 3 Runner-ups and will travel to Western Branch HS on Wednesday (AT 6:00PM) for the first round of STATES!!!.  If the boys win Wednesday, they will play next Tuesday.

Come out to support your friends and Cosby athletes.