The girls basketball team is coming off THREE straight 6A State Championships and two large cogs in the machine that made that possible are now playing Division 1 basketball.  It would be easy to assume that we would have a drop off in this upcoming year.  But you know what they say when you assume something.

Here is what Coach Mead says about the upcoming season:  “We are a very young team, only staring one senior (Dejah Carter – ODU Commit) and having many girls that moved up from JV.  As the girls move through the season and play together more, they will mesh and should become a very good team.  The strengths of the team are its outside shooting and quickness in every position.”

The girls began there season, opening up at Thomas Dale on Wednesday.  The youth of the team showed in the opener.  The team went up early, and even though the outcome was never in any doubt, they could not put the Knights away for good.  Final score:  Cosby 60 Thomas Dale 42.  Next up is Manchester on Tuesday, at Cosby – 5:45 PM  **Thsi is a double Varsity game with the boys to play at 7:15 PM. 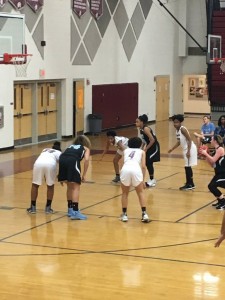